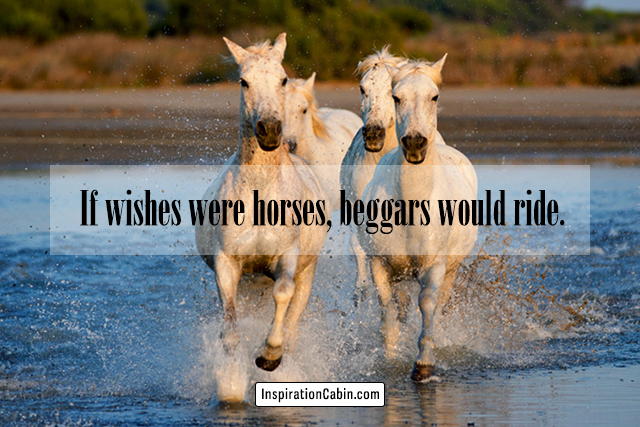 If wishes were horses, beggars would ride.

Meaning:
It is not enough to wish something to happen, but hard work is necessary to realize your wishes.

Origin:
It is a traditional nursery rhyme originating from the 16th century in England. The older version was recorded in 1605 by William Camden in his book “Remaines of a Greater Worke, Concerning Britaine”,  “If wishes were thrushes beggers would eat birds”. The reference to horses was first in James Carmichael’s Proverbs in Scots printed in 1628, which included the lines: “And if wishes were horses, pure [poor] men wald ride”. The first mention of beggars is in John Ray’s Collection of English Proverbs in 1670, in the form “If wishes would bide, beggers would ride”. The first versions with close to the modern wording was in James Kelly’s Scottish Proverbs, Collected and Arranged in 1721, with the wording “If wishes were horses, beggars would ride”. The rhyme as it is known today was published in James Orchard Halliwell’s English Nursery Rhymes collection in the 1840s.